Background and previous events: 1988: hypergates appear in different places of the Earth. The gates lead to what apparently is a different version of our planet in which elements of the present world mix with elements from the remote past and from what possibly is a remote future. From the hyperplanet, invading armies, dinosaurs and giant golems attack our world. The governments of the Earth send SWAT squads through the gates: their task is to explore the hostile planet on the other side and hopefully find a way to shut the hypergates and stop the invasion.
Sgt.Ephraim and his comrades  must shut-down an unstable wormhole which has been reported in the Opokt area. The wormhole is under the control of Damocles Garth, a renegade marine who has joined the collaborationists. The earthlings have been informed by an anonymous source in Damocles’ army: who is this person?
I use the NSAABH card deck to answer these three questions:
(Clubs) Where exactly is the wormhole?
(Diamonds) How can it be shut-down?
(Spades) Who is the anonymous informant?
(1) Five of spades – the anonymous informant is not a robot.
Ephraim’s squad recovers a memory deck whose position had been revealed by the informant. He sent the earthlings a handwritten note: so he/she is not a robot. Ephraim fails a 50-50 roll to discover a second card.
(2) Two of spades – the informant isn’t Damocles’ sidekick Tia. Ephraim’s squad is confronted by a group of gaters lead by Tia: clearly, she is loyal to the collaborationists.
(3) Ace of diamonds – the wormhole cannot be shut-down by explosives. Our heroes are defeated in an attempt to break through the defence of the gaters. They receive new from their HQ that the wormhole is supposed to be resistant to explosives.

(4) Ace of Clubs: the wormhole is not in the dungeons below Opokt.

I set up a “size ground” scenario in a dungeon below Opokt: the side controlling most of the pink cubes wins. I decided that I will roll each turn to see what opposition is found. The green were lucky in their deployment roll and got the best entrance. 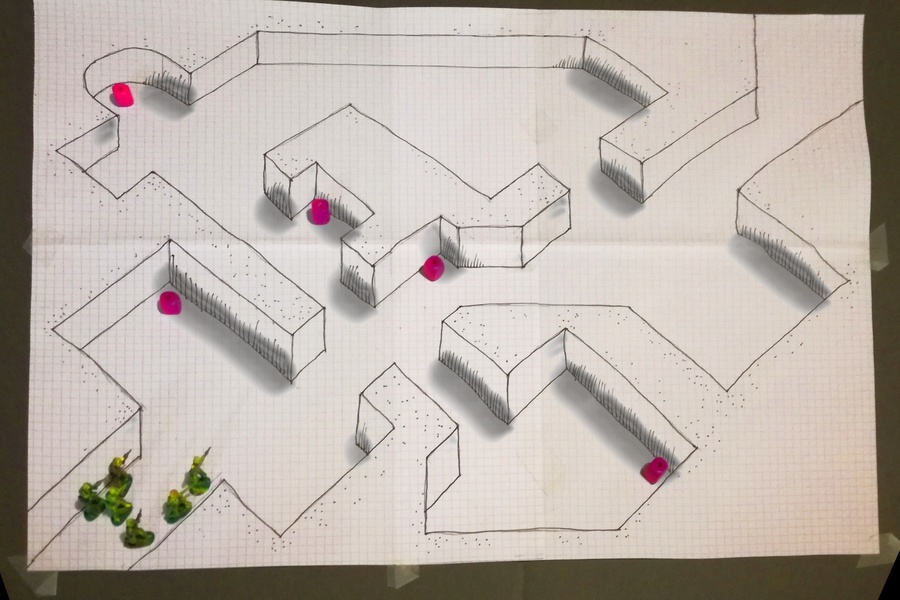 Turn 1: they are lucky again and meet no opposition. The Infantry Squad sizes the objective area in the first room. 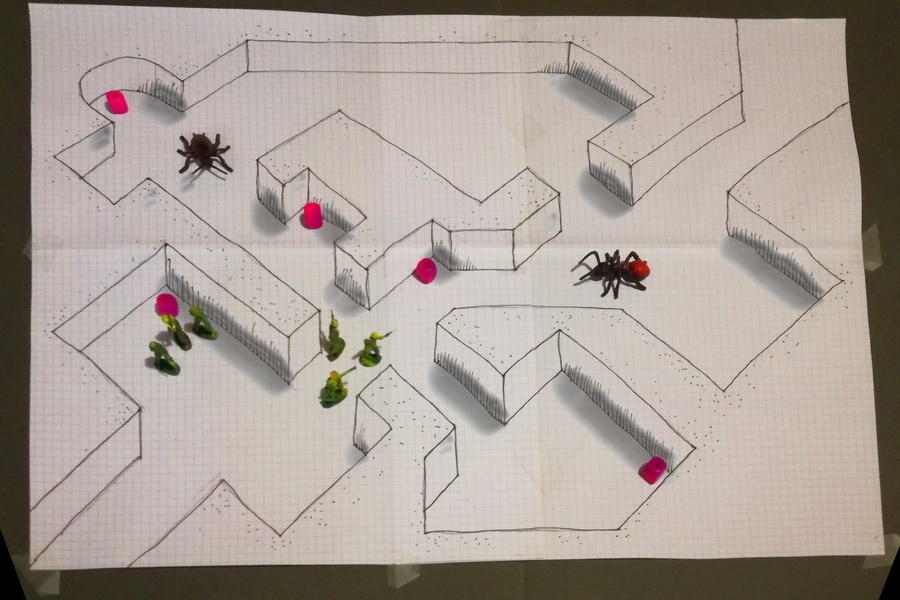 Turn 3: Our heroes kill the bugs. Ephraim is wounded in the fight, but he manages to move towards the objective in the South-East room. A blue sniper takes position in the North-West room and wounds Pierre. 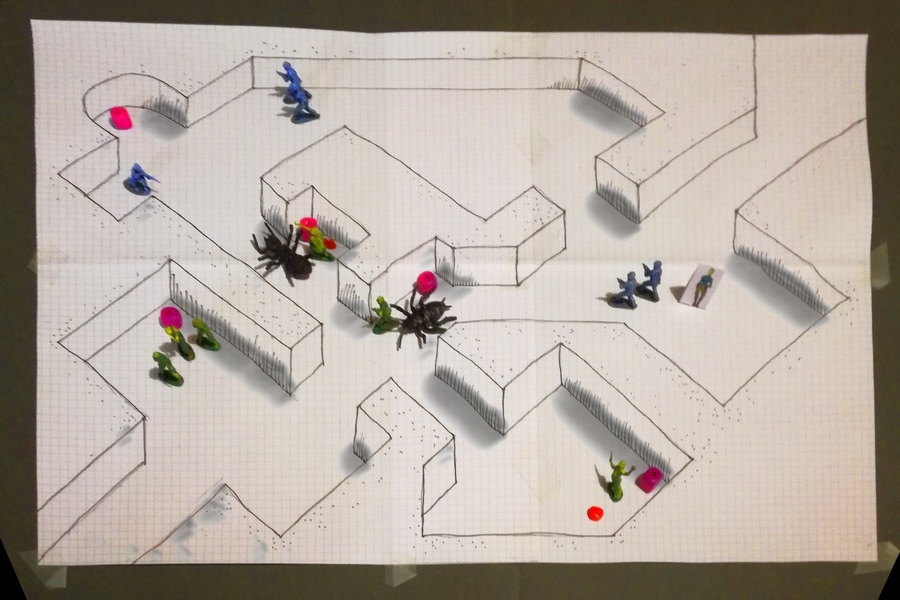 Turn 4: The green control four of the five objectives. The sniper hits Pierre again and Tia (Damocles’ sidekick) appears together with four veterans, but it is too late to make any difference. Calaf also takes down one of the enemies with a well-aimed shot.

Since this is the first of the three central “act”, I give Ephraim a chance to discover an extra clue. I roll a 50% die, and this time Ephraim is successful!
4 Of Spades: One of the blue soldiers is captured and questioned. He tells Ephraim that there is a traitor among the blue army: the mysterious informant is not a civilian.

NSAABH:
Clubs: Where exactly is the wormhole?

2. It is a portable device, carried around in a van.
3. In an abandoned factory.
4. On an island of the Opokt river.
5. In Damocles’ HQ.
Diamonds: How can it be shut-down?

2. By a technological interface.
3. Some kind of spell.
4. A physical key.
5. Killing Damocles.
Spades: Who is the anonymous informant?
1. Damocles.