An Ironsworn solo campaign, with battles fight with the Commands and Colors Ancients boardgame rules. Battles are won by the first side who destroys six enemy units. See campaign set-up here. [This is a gaming campaign: please do not expect historic accuracy]

Previous Events: Keera is the leader of a Gallic clan: the Sunderers. She allies with the Wind-Riders, lead by Mogurix, in order to march South towards the richest lands that once were Gallic and are now controlled by the Romans. But when the two clans are ready to move, they are attacked by a Roman army.

Lavinia:  Mogurix’ wife. A Healer who was born a Roman but was adopted by the Gauls when a child.

Beltros: a Druid and the oldest member of Keera’s Sunderers. He disapproves the expedition South, believing that the risks of war should be avoided whenever possible.

Keera and Mogurix lead their clans in the battle against a Roman legion. Mogurix leads the chariots and cavalry of the Wind Riders on the left wing; Keera is at the centre of the line, with the main body of the Gallic warriors.

The two wings are the first to engage combat, while the warriors wait behind. The chariots are destroyed in the first impact [G:0 R:1], but the cavalry opens a gap in the Roman line and rushes through it.

Yet, the now isolated unit is doomed: the Romans surround it and destroy it [G:0 R:2]. The Gauls also lose a Warrior unit on their right flank [G:0 R:3].

Mogurix falls back and joins the leftmost group of warriors. The Roman line advances at Double Time and the two main bodies of infantry engage a furious fight.

Keera is initially successful, destroying the two Roman Heavy Infantry units and a Medium Infantry unit [G:3 R:3]; one of the Roman leaders is now alone in the middle of the battlefield. But also Keera’s men are now in bad shape. 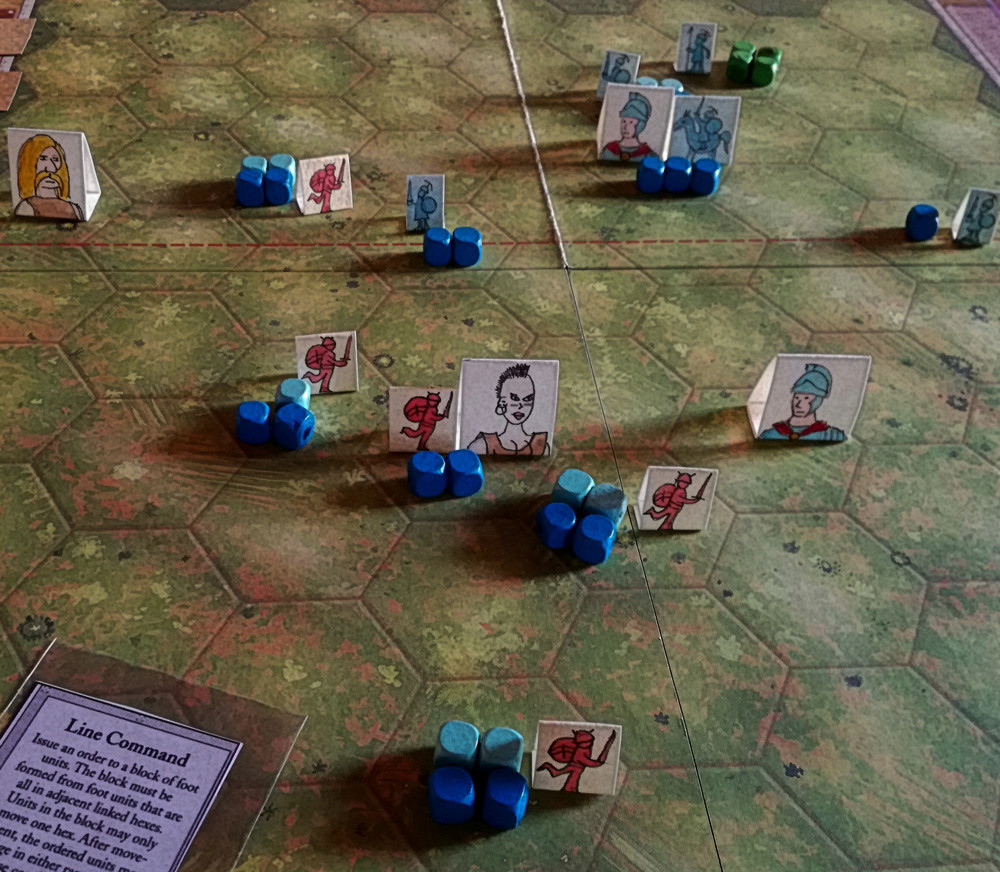 The second Roman leader comes to the aid of his colleague with his cavalry, but this counter-attack is only partly a success, with heavy losses on both sides [G:5 R:5].

While Keera is forced to retreat, Mogurix drives the final blow by killing the isolated Roman leader. [G:6 R:5]

This Battle is only a Weak Hit for the Gauls (Pay the Price). They are now able to begin their Southward journey, but all their chariots have been destroyed in the battle and they will fight with only 11 units instead of 12 until they can rebuild them.