A Commands and Colors Ancients solo campaign, with RPG elements based on Biviusand the free subset of the Game Master’s Apprentice (GMA) Deck. The campaign will end one one of two sides wins its third victory. See setup here.

Previous events: Neos, the son of the tyrant of Syracuse, has broken his marriage vow with the Carthaginian Bastet. His father exiled him to the island of Pyros (a Syracusan colony) where he became the lover of the ruler Zenon. Bastet and her mother Lilith attack Pyros to force Neos to marry Bastet or take revenge upon him. They occupy the Southern part of the island without encountering opposition, and defeat the Syracusan army in the Sika Valley. As the invaders push West towards the sea-side village of Ormiskos, they are defeated by Zenon, who also captures Bastet. Zenon’s proposals of an agreement are rejected by Lilith. Neos now refuses to fight: Bastet has been captured and he wants the battle against Lilith to be fair. The Carthaginian leader takes advantage of the situation and defeats Zenon at Lofos. She is now ready to attack Zenon’s stronghold at Kastro.

Story-telling prelude: the Carthaginian have put Kastro under siege. Something unexpected happens.

GMA: convince arrogant merchant
[I interpret this as “a convincing and arrogant mercenary”]
Cordolix, a Gallic veteran mercenary, deserts Zenon to join Lilith’s army. He tells her he has fought for the Carthaginian before, in Sicily, and he knows how superior they are to the Greek.

Has Cordolix freed Bastet and carried her with him? NO

How does Cordolix convince Lilith to let him lead her Heavy Infantry? [Two options a-la Bivius]

B. Cordolix swears he will kill Zenon in battle

Having found out of Cordolix desertion, Neos decides he will fight again. Each army will have two leaders.

The Cavarly of Neos and Lilith are soon engaged in a fight. The Syracusan prevails and Lilith is forced to retreat and join a Medium Infantry unit: both her cavalry units are destroyed [C:0 S:2]
Neos charges again, but this time Lilith battles back and forces him to retreat.

At the centre of the battlefield, Cordolix and Zenon also engage in Combat. The first destroyed unit is Carthaginian Auxilia [C:0 S:3] and the Carthaginian infantry must retreat.

But Cordolix seems to want to fulfil his promise: he attacks Zenon and scatters both his Heavy Infantry and the Medium Infantry backup. Zenon is alone, retreating towards the fortifications of Kastro. [C:2 S:3] 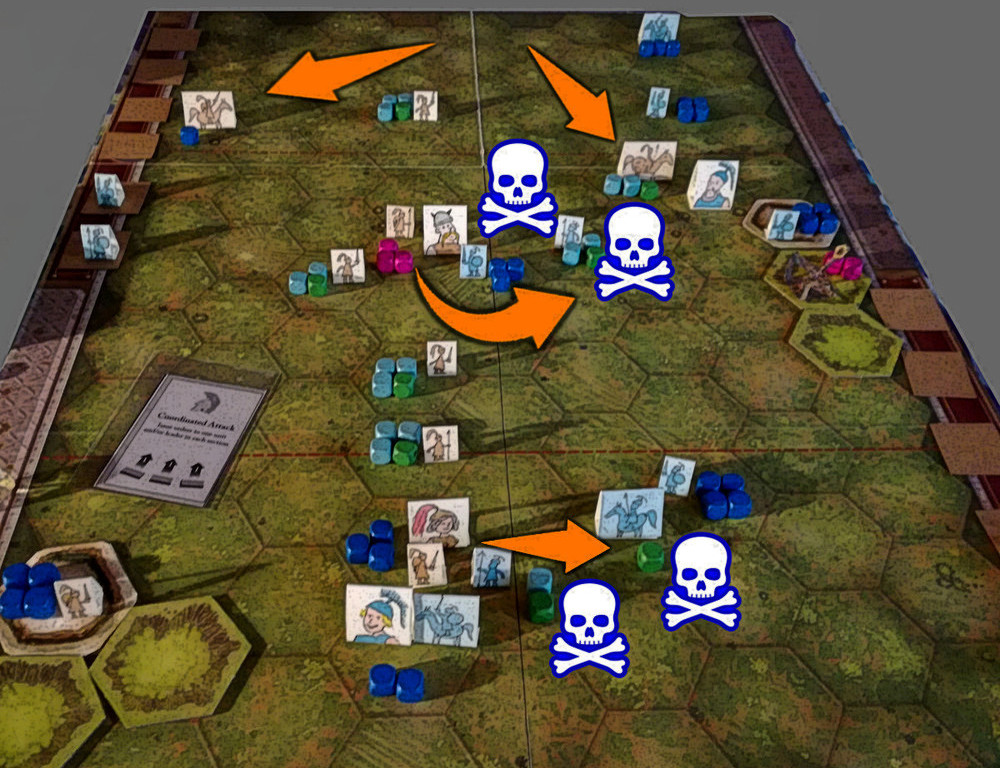 Lilith sees that the time is favourable and launches a Coordinated Attack. On the Carthaginian left flank, a cavalry unit tries to kill the fugitive Zenon, but fails. At the centre, Cordolix charges the Carthagenian infantry that had already been hit in the previous fight: he destroys two units. [C:4 S:3]
Lilith does the same on the right-flank, finishing two badly damaged Syracusan units [C:6 S:3]

This is the third victory for the Carthaginian, hence the end of the Campaign. Kastro falls, Lilith conquers the island of Pyros and frees her daughter Bastet.

How does it end for the main characters? [Again, a-la Bivius]

B. Neos manages to escape: he cannot be found anywhere. Lilith sentences Zenon to death. Bastet marries Cordolix and the couple will now rule on the island of Pyros.

Great! Lilith and Neos can meet again in the future for a second campaign!