Lt.Bassma has accepted Claude’s proposal to scout a specific area in the center of Ybeena, looking for a way to easy the conquer of sector E.

Claude’s squad includes two REP4 soldiers (one of whom is “fast” and moves 4” more) and a BK-5 Robot (no ranged combat).

They enter from the North-East the area they intend to explore. Three Potential Enemy Force markers (PEFs) await them at the center of the board. 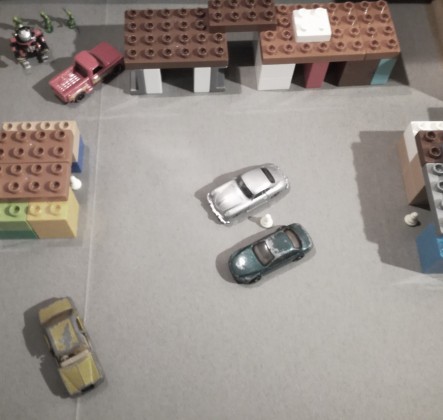 The PEF on the right resolves as four aliens.

More aliens emerge from behind the two cars. The Earthlings have taken position near and on the red pick-up. They open fire and the first alien goes down. The Robot moves forward to engage the aliens in melee.

The Robot and the aliens come into contact. The fastest of the Green soldiers runs behind the building on the left, reaching the target area.

The Robot and the soldiers are being very effective, but there simply are too many aliens. Two of them are now dangerously close to the Green soldiers.

The Robot is finally overcome. The soldier that was taking cover in a building is also put out of the fight.

The scouting soldier has accomplished the mission and starts to move back to reach Claude, but an alien is ready to cross his way.

The alien avoids the soldier’s fire, charges into melee and brings the man out of combat. Claude is left alone and has no choice but to leave the field.

[MiSo roll] Who conquered sector E:
D4 A – The Earthlings [since Claude lost the encounter, I use a lower die here]
D6 B – The Aliens

D4:3 D6:1 (option A)
Claude’s failure doesn’t stop the Greens from conquering the center of Ybeena. The next mission will be a Raid.

[D4] A – Bassma was very deluded by Claude. She thinks his arrogance has caused the useless loss of two men. Was he trying to make her situation harder? What are his ambitions? He will be sent on the next mission with the only support of a Robot.

[D6] B – Major Stavros, Bassma’s direct superior, finds it difficult to protect Bassma from the insinuations that she is a traitor and a collaborationist. He is forced to accept that Lt.O’Gawell joins the next attack as a supervisor. O’Gawell will be attached to Claude’s squad.