Second scenario of my hybrid Pulp Alley Tomb of the Serpent / OPR DoubleTap: The Thing in the Well. This time the evil serpent cultists must face the just-as-evil forces of the Colonial Empire.

The Imperial troops are lead by Aurelius (Q3+). The three soldiers are Q4+: Caius and Demetrius are fast.
The four cultists are Q4+ with Piercing Fire. 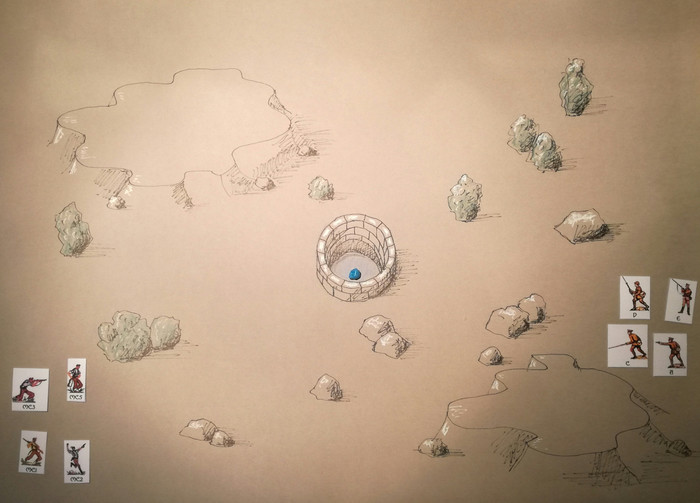 The Plot Point is at the bottom of the well at the central well. To grab the relic, a figure must pass two Quality Tests at -1, taking a hit for a failed test.

The “fast” ability proved vital: after the second round, Caius already was inside the well. Demetrius kills one of the cultists.

Round 3: a second cultist is killed by Demetrius. Caius passes the first Quality test.
Round 4: Caius fails both his QT and the save roll to survive the hit: he is out of action! Demetrius and one of the cultists enter the deadly well. Aurelius shots a third cultist: the one inside the well is the only one still active.

Round 5: also the cultist fails his QT and the following save. All the cultists being dead, I declared the scenario an Imperial victory. The relic (the Wings of Celerity) was recovered and given to Aurelius.

Demetrius has scored two kills and survived the scenario.

Aurelius has scored one kill and survived the scenario.

Ennius has survived the scenario.