The One Page Rules catalog has been recently radically renewed. In this process, a completely new game has been published: Double Tap “fast paced spec-ops firefights set in the near future”. As always, it is simple, well-thought and available as a free download.
The game includes a reaction system that forces interesting decision and an accurate use of cover (and elevation, which counts as cover). Also, the different weapons have been given advantages and disadvantages based on range (a SMG has a disadvantage at medium range, while a rifle is more effective at medium range than at short range) so one has to find the optimal distance to maximize the effect of a unit’s weapon while minimizing the effect of the opponent’s weapons.

Another innovation with respect to the older OPR games I tried in the past is that, during a turn, a player is not constrained to activate each model once: you have as many activations as your models, but you can allocate these activations freely.

Finally, the reaction system: when a model has line of sight to an activating enemy unit, it can choose one of: Move, Dodge, Fire (or Melee, if it is so engaged with an enemy unit). This choice if always an interesting one: when the model receives fire from a stronger unit, dodging might be the best choice, but firing gives you a chance to damage the enemy. If the unit is not under fire, choosing between moving and firing is often difficult.

The game comes with a point system that allows you the flexible creation of well-balanced armies. Each army will typically have between 5 and 12 models.

For my game, I used the following 46 points armies:

The battlefield presented a number of obstacles, vehicles and small buildings, but maybe next time I will have even more. For this kind of game, the availability of cover is really essential.

This is how the game went.

Round 1. The robot is very effective, killing several Red SMG soldiers before they are close enough to respond to fire. The Reds try to gain an advantage by climbing on one of the buildings and on the blue truck, but some are shot by reactions as soon as they came into view of the robot.
The Blue soldiers move forward slowly, while the robot uses most activations.

Round 2. The Bot is killed by a lucky reaction roll from a rifle-man on the top of the truck, but only five Red units are still alive. Two of the Blue soldiers are in good positions and the third one moves forward.

Round 3. One of the Blue soldiers dashes through the open ground and reaches the cars near the Red positions. At the end of the turn, only one Red soldier still stands. 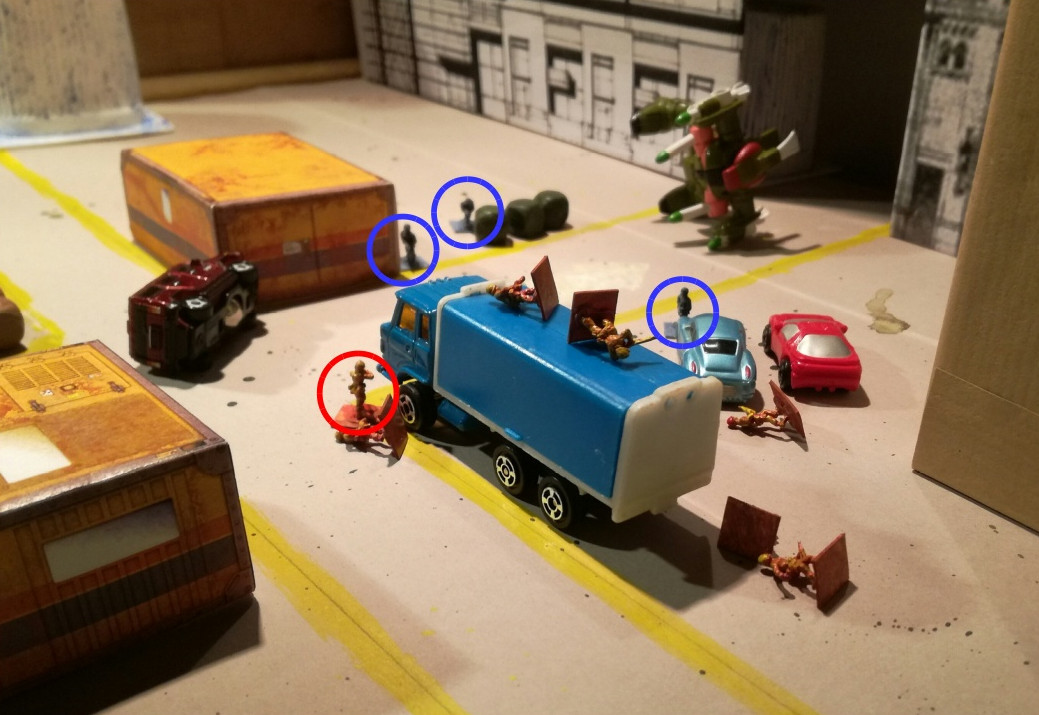 Round 4. the last Red soldier is killed. The Blue have lost only the robot.

It was a very dynamic game. The reaction system really keeps things continually moving on both sides. I realize I made some obvious mistakes, under-using the Red rifles which should fire from greater distances. I hope to play this scenario again, exploring different possibilities. The game is slightly more complex than other OPR games, but this is well justified by the variety of situations and choices offered to the player.