Prior Events: [1] The two scouts Eve Reith and Titania Waunder are sent in a small ship to investigate the surface of an unknown planet. Their mother ship is destroyed by a mysterious missile. When the scouts crash-land on the island of Vord, Eve breaks a leg. In the following weeks, she is cured by a Pnumekin (a human servant of the Pnume aliens), R2714, who also teaches her the basics of the language of planet Tschai. The underground Pnume settlement is attacked by the Dirdir, a different alien race. Eve escapes and reaches the surface, but she is wounded. [2] She meets a man, Uarzuan, who cures her wound and leads her to an abandoned Pnume tunnel. [3] A Dirdir follows them into the tunnel and kills Uarzuan. [4] Eve kills the Dirdir, but she is taken prisoner by a fellow of Uarzuan, Zutiz; they sail Northward on an artificial canal. [5] Zutiz stops the boat near a shrine, where a priestess of the blue moon Braz declares Eve free and bids Zutiz to take Eve to the temple of Az (the pink moon) in Osomena, on the Northern shore of Vord. [6] They reach Osomena, but Eve fails the trial of Az and is ordered to leave before the next day. In a tavern, she meets a girl, Caj, who tells her that the scouting starship was embarked on a ship directed to Dima, in Southern Charchan, also stopping in Bamarsa in Eastern Kachan.

Eve’s goal: to find a passage towards Dima.

Round 1: Eve asks Caj if she can help her find a passage towards Dima. Can Caj help?
YES AND she has her own ship, the Qumberina.

Round 2: Would she be interested in sailing to Dima? It’s a very long journey….
YES AND she has been thinking for a long time that it would be a good idea to sail to Bamarsa in search for Viz, a material that can be sold at high prices in Charchan. She is willing to take Caj and Zutiz as part of her crew.

Round 3: Can they leave Osomena early tomorrow?
YES BUT there is not time to search for other members of the crew. The only available expert sailor is Kodr, a skilled but very superstitious man from the small islands South of Cape Dread. 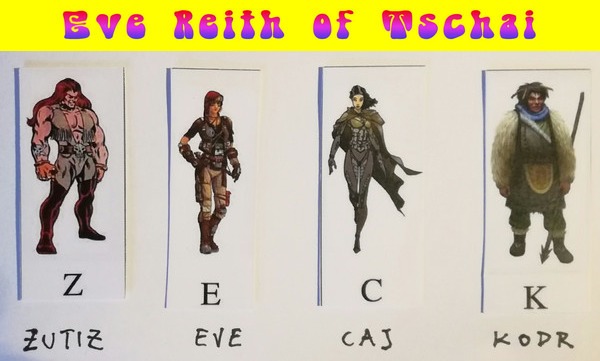