I ran this using an home-brewed mix of the PZ8 Postcard and OnePage WarStuff rules. There are a few things to fix, mainly about the vehicles, but the two rule sets are excellent, so I have hope to soon come to something that works well for me. To celebrate the start of this new campaign, I painted a watercolor background for the scenario.

“1988: hypergates appear in different places of the Earth. The gates lead to what apparently is a different version of our planet in which elements of the present world mix with elements from the remote past and from what possibly is a remote future. From the hyperplanet, invading armies, dinosaurs and giant mutant fighters attack our world. The governments of the Earth send SWAT squads through the gates: their task is to explore the hostile planet on the other side and hopefully find a way to shut the hypergates and stop the invasion”.

The Terrestrial squad is the Green one. Today they are the Defenders (I rolled for the roles). The leader of the team is Sgt. Ninovich, the guy with the gun at the extreme right. Using the cost system that comes with WarStuff, I assembled the Attacking side: two cars each transporting a team of three soldiers and a giant warrior (a Large, Tough, Brutal golem). I made the attacking team slightly more powerful. The Defenders are protected by some debris and an archway. The Attackers come directly forward down the road.

Turn 1: the cars come down the road and stop in front of the Defenders. The Golem advances more slowly. The Defenders shoot, but they miss.

Turn 2: The Attackers exit from the Gray car. The last one of the squad rolls a 2, so (as per the PZ8 rules) the turn passes to the Defenders. They shoot and miss (1 rolled, turn shift again). The blue car moves forward, attacking from the side. The Attackers go for Hand to Hand combat. The Defenders are lucky enough to kill two Attackers losing only one man. I think this was the turning point of the encounter. 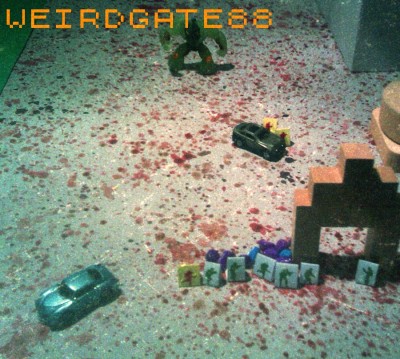 Turn 3: The Attacker next to the gray car shoot and miss. The Defenders kill the Golem (who misses the save roll granted by is Toughness). The last occupant of the blue car fails to activate. 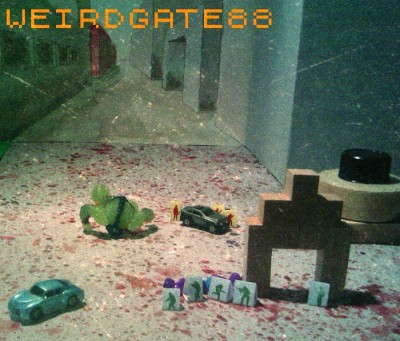 Turn 4: One of the defenders move to the blue car, fights Hand to Hand the Attacker leader inside it and kills him. Now the Attackers have lost half their figures and their leader. Two morale tests are rolled and passed. Firefight with the Attackers next to the gray car. All the figures on both sides are in cover, so it is not easy to hit (a 6 on D6 is needed). Yet the Defenders manage to kill two Attackers. Only one is left, behind the gray car.