This is the first in what I hope will be a short series of games comparing different sets of rules on the same scenario.

The scenario is straightforward: five Attackers enter the map from the South. Their objective is to cross a stream and reach the three buildings on the opposite site of the map. The Attackers should search the three buildings: a figure must end its movement next to each building and roll 4-6 on a d6. The defenders are initially represented by 4 PEFs (Possible Enemy Forces, using Two Hours Wargames terminology). Each PEF is resolved by rolling a d6 when the Attackers get in sight: 1-2=no Defender; 3-4=1 Defender; 5-6 2 Defenders. I decided not to remove all PEFs after 3 or 4 Defenders were generated (since there are only 5 Attackers, 3 or 4 Defenders should be enough).

The guy with the gun is the leader of the Attackers: a Veteran. All the other fighters (Attackers and Defenders) are average figures armed with rifles.

The first set of rules I have used is the Pz8 Ultra Simple Postcard Sized WW2 Infantry Skirmish Wargame Rules.

With these rules, whenever a figure must do something (moving or firing) a d6 is rolled. If a 1 or 2 is rolled, the action fails and the turn passes to the other side. When firing, a 5 or 6 is a success, i.e. a kill. No special states for the figures are specified.

Turn 1: The first PEF was resolved as a single Defenders. The Attackers have the initiative, and manage to kill the Defenders at the second shot (a 6 was needed, since the Defender was in cover).

Turn 2 and 3: The Attackers cross the stream.

Turn 5: the other Attackers move to the border of the wood. More shooting on both sides, but all miss.

Turn 6 and 7: more firing. An Attacker and a Defender killed. Now there are only two Attackers and two Defenders left. 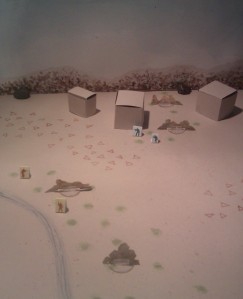 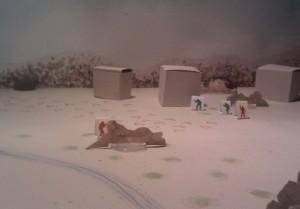 Turn 9 to 12: shooting between the only surviving attacker and the two Defenders.

Turn 13: the Attacker moves in close combat and is killed.

The game was extremely quick. A rather easy victory for the Defenders, who only lost half of their men.