January 21st 1958: The cold war is raging on the Earth. On Mars, the war is not so cold. The NATO and the Soviet Union confront each other to gain control of the Red Planet. The two armies are fighting also in Martian city M17, with Sergeant Ratti leading a squad that escorts the anthropologist Petri in his search for Martian relics. Prof. Antjanov leads the opposing soviet squad.

Antjanov is trying to remove a bronze plate applied at the basis of a Martian stele. Ratti and his team will not let him put his hands on this unique Martian relic. 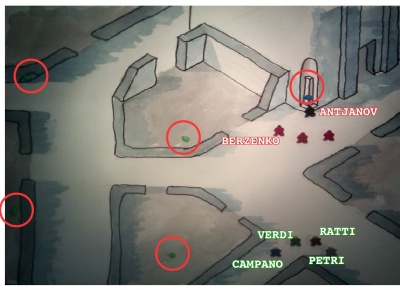 Campano and Verdi move forward. Verdi takes cover and then runs through the building on the right. Campano manages to Knock Out both Antjnov’s sidekick Berzenko and another soviet soldier. Petri enters a building on the left, attracted by another interesting Martian relic: he is pursued by a soviet, that Ratti tries to stop.

Antjanov keeps working on the bronze plate. He successfully replies to the Italian attacks. Verdi goes down. Ratti is delayed by the fight with the soviet soldier and Petri takes a lot of time to dig the Martian carved stone from the deep niche in which it is buried.

Finally Antjanov manages to detach the bronze plate. Petri gets hold of the other Martian artifact. Ratti gets rid of the soviet soldier and joins Campano in shooting Antjanov, but the Russian professor wounds both the attackers and leaves the scene as a winner.